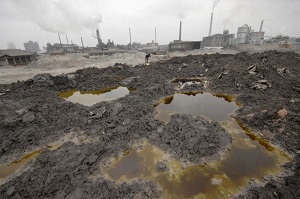 With ever increasing legislative and consumer pressure to clean up brownfield sites before development, remediation has grown rapidly into a significant global industry. Remediation has a lot in common with agriculture, in that it uses chemical, physical, and biological means to solve soil-based issues. In fact, many of the advanced solutions found in agriculture can be translated into the context of remediating polluted soils. In this post, I will focus on the use of plant nutrition products, and plants themselves, to remediate contaminated land.

Synthetic organic compounds are common pollutants and the best remediation strategy is often to degrade them in situ into non-active catabolites. Hydrocarbons (petrochemicals), polychlorinated biphenyls (PCB), polyaromatic hydrocarbons (PAH), and synthetic organics (e.g. pharmaceuticals and pesticides) can all potentially be degraded using either chemical or biological methods.

Oxygenating the soil is very effective in breaking down hydrocarbons. Manual aeration is the obvious choice to add oxygen either by simply ploughing/cultivating the soil. Where this is not possible aeration can be achieved by injecting compressed air, or oxygen-enriched air. All these options will lead to the oxidation of the toxic volatile organic compounds (VOC) that result from hydrocarbon pollution. Aeration will also assist with decompacting the soil to allow root growth, as well as aid the growth and proliferation of bacteria and fungi that can metabolise hydrocarbon contaminants and thus lead to faster decontamination. The addition of strong oxidants, such as peroxides and ozone gas, can also be used to degrade organic pollutants contaminating soils, however, caution should be taken with them as they can be toxic to beneficial microbes and plants. Hydrogen peroxide is normally the go-to peroxide, but many other peroxides are available and these may suit certain situations depending upon the type of pollutant and how far into the soil profile it has reached.

Flocculants can also be used to aerate soils and repair soil structure if destroyed by pollutants (especially sodium), compaction, and the removal of top soil. Some flocculants may not be suitable for bioremediation as they themselves contain plant toxins (e.g. alum), or lack penetration through the soil profile and take a long time to act (e.g. granular gypsum). A novel solution is to use Plater Bio’s Liquid Gypsum which, unlike powdered gypsum, can be sprayed over large volumes of soil, either as it is being mechanically cultivated, or simply allowed to soak into the soil profile. In addition, the flocculation effect will be instantaneous allowing far more rapid analysis of whether treatments have been effective. Liquid Gypsum would be especially useful for compacted, alkali, salt-stressed, and heavy metal-polluted soils. Hot water can be applied alongside gypsum treatments to free soils of hydrocarbons by reducing their viscosity. However, if the temperature is too high you risk sterilizing the soil and losing the beneficial microbes degrading the hydrocarbons.

In addition to direct oxidation of the pollutant, aeration is key to stimulate the activity of microbes and other life forms that will degrade the pollutants. Specially adapted species/strains can be purposely added to increase this activity, and this is bioremediation. These can be sprayed on the surface, worked into the soil or injected into the soil profile. The exact species of microbes used are often isolated from other polluted sites and then purposely cultured in vitro to produce concentrated products. While most times it is aerobic organisms that are required sometimes anaerobes are required and there are a number of options and products sold in this category.

Adding both biorational fertilizers and biostimulants will further stimulate the growth of beneficial microbes and plants to speed up the remediation process. Biostimulants are excellent at stimulating the growth of plants in stressful situations, so are suited to situations where there are polluted soils. However, as many are energy sources for microbes (molasses and seaweed extract especially), care should be taken where there might already be limited oxygen levels (such as hydrocarbon contamination) as the stimulation of aerobes could lead to anoxic conditions.

There has been a recent surge in interest in using ‘char’ products from the pyrolysis of green waste to remediate soils contaminated with organic pollutants (pesticides) and heavy metals. Char compounds which have proved successful so far include standard charcoal, refined activated carbon, and biochar (pictured below), which is produced from green waste. Pollutants are adsorbed onto the char particles where they become unavailable to plant uptake, are often deactivated as a result, with organic pollutants then prone to deactivation by the activity of microbes living in and on the char. Plants can also be used to remediate soils by concentrating inorganic pollutants (which can then be removed by pruning or grubbing), deactivating organic pollutants (by absorption and then detoxification by specific enzymes) or by promoting the growth of beneficial microbes that degrade the pollutants in the rhizosphere. These microbes feed on the exudates from the roots, and in the case of some wetland plants can access oxygen released by the roots.

Certain species of plants will ‘hyperaccumulate’ specific pollutants. This includes many species that have the ability to store remarkably high levels of normally toxic heavy metals and radioactive isotopes. There is now a good deal of academic literature which highlights which plants species will accumulate a specific heavy metal. These studies can be used to design a remediation program and estimate the potential effectiveness (by comparing growth rates and metal contents of the tissues to the volume of pollutant in the top soil). Plants that hyperaccumulate heavy metals are thought to tolerate these usually deadly conditions because they evolved in areas where the underlying geology makes them toxic to other plants (e.g. serpentine soils), or it is an evolved adaptation that allows them to produce tissues so toxic to pests and diseases that they cannot be attacked. To be classed as a hyperaccumulator the plants need to be able to tolerate heavy metals building up to set levels in their tissues; this includes 1g / kg for nickel, copper or lead, and 10g / kg for zinc or magnesium. Some hyperaccumulating species are so well adapted to growing in toxic soils that when cultivated away from these sites they actually grow better when a small concentration of the pollutant is added in the growing medium.

One method plants use to absorb heavy metals is to produce compounds known as carboxylates, which complex heavy metal ions. Carboxylates are produced in the root exudates, and are also important in nutrient uptake and soil formation. This can be further augmented by the addition of citrates and other chelates which will assist in this process and subsequently be absorbed by the plant, for more information see mono ammonium citrate. Aminopolycarboxlic acids, such as EDTA, can also be used to chelate heavy metals and allow uptake by plants however their use is controversial as they are not readily biodegradable and found to be not as effective as mono ammonium citrate (Ref1 Ref2). Furthermore, citrates removed less of the plant nutrients than EDTA and improved soil structure.

Acidic conditions in the soil aid the release of many plant nutrients, and also many toxic heavy metals, particularly aluminium. Therefore, any activity that reduces soil pH will increase the solubility of these elements and could also be an issue for the health of plants not adapted to acidic soils. Therefore, soil acidification can be used to release bound toxins for accumulation in plants. Alternatively, soil pH can be raised to lock in toxins and make it suitable for the cultivation of plants that would otherwise be harmed.

Poplar, alder and willow trees are notable as they have been found to be particularly effective for cleaning up a wide range of compounds and they are also fast-growing with a tolerance to poor quality soils. However, as can be seen in the willow above, these species can attain a very large size. As such it is best practise to coppice the trees (seen below) to ease the harvesting of the shoots and improve biomass production. Poplar and alder trees are particularly good for degrading spent engine oils, which also contain a number of harmful additives and heavy metals. It is thought that it is actually specialised bacteria on the poplar’s roots and in specialised nodules on the alder roots (see picture below) are actually chiefly responsible for breaking the hydrocarbons in the soil into harmless compounds and so it may pay to encourage these by keeping the soil aerated and minimise the use of pesticides in already polluted soils. Despite not being a plant nutrient or heavy metal, gold is accumulated in the tissues of silky phacelia (Phacelia sericea) Indian mustard (Brassica juncea) and alder (Alnus glutinosa). Mining companies could therefore use hyperaccumulators to clean up open cast mines or polluted areas and thus prevent damaging litigation. Scientists have also found that they can increase the concentration of gold accumulated in the tissues of hyperaccumulating plants being cultivated on gold-rich soils by adding ammonium thiocyanate (below) to the soil. This potentially opens up the possibility of using these plants to improve the extraction process, not just the clean-up phase!

If you would like further details on these topics or to discuss specific remediation issues please get in touch. Next week I will go into more depth on the use of flocculants in a post reviewing chitosan products.