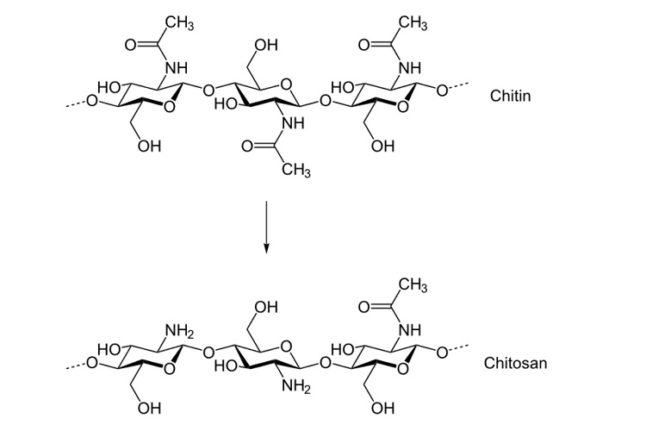 Chitosan is a natural polymer that has applications in a range of industries. Here at Plater Bio we are working on an exciting project to manufacture chitosan on an industrial scale. The facility we are designing will be the only one of its kind in Europe.

Chitosan manufacturing begins by extracting the polysaccharide chitin, which is found in many biological organisms. It provides the structural rigidity associated with the exoskeletons of invertebrates and the cell walls of fungi. However, chitin is not found in vertebrates or plants.

Chitin is unusual for a polysaccharide in that it contains nitrogen. If the acetyl groups on the chitin polysaccharide chain are converted to amine groups chitosan is formed. This conversion creates one of the few cationic polymers found in nature.

The unique biochemical properties of chitosan, combined with its natural origin, has meant that chitosan is now increasingly being used in a wide range of industrial applications. Biotechnologists have found uses for chitosan in the fields of medicine, material science, environmental remediation and agriculture. Chitosan is soluble in weak acids, so can be used either as a solution, or as a gel or bioplastic in alkaline conditions.

In agriculture, chitosan is used as either a biostimulants or biopesticide depending upon the formulation and the way it is used. As chitosan is manufactured from natural polysaccharides it is organically certifiable, allowed to be used as a biopesticide under EU organic regulations    and is exempt from the REACH regulations.

The current theory of how chitosan works on crops is that it activates the plants’ innate defence mechanisms. These particular defence systems are only activated when there is an attack by a pest or pathogen. As all fungal pathogens and insect pests contain chitin, and plants themselves do not, it is a good molecule to employ in order to trigger such defences.

There have also been other suggested modes of action of chitosan in helping plant growth, including; direct antibiosis against pests and pathogens of crops, the stimulation of beneficial microbes and direct up-regulation of plant growth and modified plant development.

In addition to being used as a foliar spray, there is also interest in using chitosan to coat fertilizer prills and granules. Here it can be used as a bioplastic to limit dust release, control nutrient release, and add biostimulant activity to solid fertilizers.

Despite the clear potential for chitosan, there are three key challenges that have prevent its widespread use in agriculture;

Price. The comparative high cost of chitosan currently makes it uneconomical for some uses, however with companies such as Plater Bio looking to increase production we hope that we can make it an economic option for all crops.

Animal origin. The fact that the majority of chitosan on sale globally is made from animal waste (crustacean shells) makes it not possible to sell it in countries where animal waste products are restricted or to customers who have strict controls on inputs that must be vegan/halal/Kosher. Furthermore, it is also conceivable that crustacean-derived chitosan could be an issue for people who are allergic to seafood if allergens are not removed during the manufacturing process. All these potential problems will not be an issue for Plater Bio’s fungal-derived chitosan.

High sodium content. Sodium is toxic to plants, and crops particularly sensitive to sodium could be compromised with conventional chitosan foliar sprays. However, Plater Bio will be producing chitosan without the use of sodium hydroxide.

In addition to the use of chitosan, chitin is also used in agriculture. Unlike chitosan, chitin is insoluble and so is applied as a powder or granule. Most commonly chitin powder is used to control nematode infestations, with it being thought to help control this pest by stimulating the growth of chitinolytic microbes that subsequently go on to overcome the nematode. However, application rates for chitin must be high, so it is not always an economic option.

Chitin can also be converted to glucosamine in a different reaction to that which creates chitosan. However, while the use of glucosamine is widespread in human health, there are no agricultural uses for glucosamine, and little-to-no academic reports of positive effects of applications improving plant growth or health.

It is essential to take into account the chemical properties of chitosan when formulating or tank mixing it in agriculture. For example, chitosan is not compatible with seaweed extracts as the chitosan will flocculate the alginates in the seaweed extract (picture below). Chitosan will also flocculate humic acid products. This is in addition to the fact that seaweed and humate products are often highly alkaline, which will make the chitosan insoluble. So, if you are not careful, you can end up with more solids than liquids in your tank! Chitosan in other industries

Chitosan’s powerful flocculating ability is extremely useful in other industrial applications. For example, it is used at low concentrations to remove contaminants from water. In waste water treatment this includes phosphates and humates.

When in alkaline conditions, chitosan comes out of solution to form a gel. This chemical property has meant that chitosan is increasingly being sort in a number of applications to create bioplastics, coatings and emulsifying colloids. As such chitosan is a biological polymer that fits many of the requirements for medicinal and cosmetic applications to deliver active ingredients. It is also being used to create prototype plastics where its biodegradability and anti-microbial properties are major advantages, such as protecting fresh produce or making medical bandages.

Chitosan is usually manufactured with hydrochloride as the counter-ion, however, chitosan acetate and citrate are also used in water treatment, but not as extensively. Solutions can also be spray-dried to prolong the shelf-life, reduce transport costs, or to meet additional formulation requirements. The chitosan used in medical and cosmetic applications is often bleached and further refined and purified, but its origin and biochemical properties are usually the same as those used in agriculture.

Key parameters often looked for in chitosan are;

Purity Tissues vary greatly in their chitin content. Crustacean exoskeletons are high in chitin and are readily available on a massive scale due to being a waste product of the seafood industry. However, they also contain significant amounts of protein, lipids and calcium carbonate that must be removed to create purified chitin. Fungal biomass is lower in chitin and needs to be purposely cultivated (below, right), but the glucan and phenolic contaminants in the tissues are less problematic for extracting the chitosan.

Degree of deacetylation (DDA) is a measure of the effectiveness of the deacetylation process is during manufacturing, with a higher percentage usually meaning that the chitosan is more bioactive and soluble.

Molecular weight (MW) is governed by the polymer chain length, and as such will vary according to how the manufacturing process is undertaken and the starting material. Short chains should be best for aqueous solutions, while longer chains would suit bioplastic and gel applications.

Please get in touch if you would like to more about our chitosan production, its applications, and partnership opportunities. You may also wish to read an academic paper I wrote on the use of chitosan in agriculture here. Left: micronized humate solution on the left. Right; the same solution with the addition of Plater Bio’s fungal chitosan.