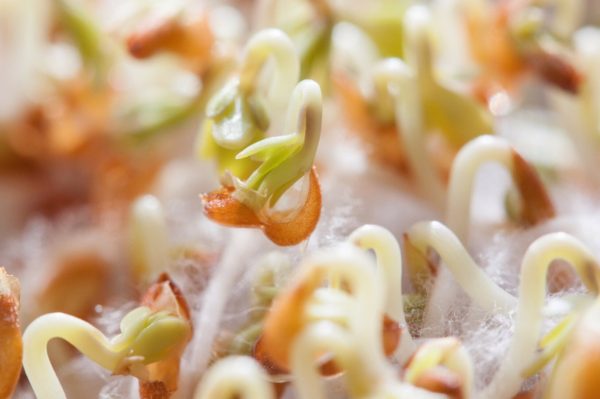 A germination bioassay is probably the most basic experiment a plant scientist can conduct; you simply get a chemical and apply it to some seeds and see what happens! As such, a wide range of chemicals have been found to promote germination. Below I have put together a non-exhaustive list of the chemicals that I have seen reports of demonstrating a clear promotion of germination in at least one plant species. The use of nearly all these compounds is currently unapproved in most countries and many are downright dangerous, such as nitro-glycerine! As such, I am listing them purely to illustrate the variety of substances that can promote germination.

Those chemicals marked with an asterisk I believe are acting to promote germination by “scarifying” the seed coat. Scarification is the process of weakening the seed coat in order to allow water and air to flow into the seed where they are required before germination can begin. While scarification can be performed by hand with a file or sand paper for large seeds, for small or a high number of seeds, an acid treatment is used. An acid scarification treatment recreates the conditions inside the stomach of a mammal, bird or even some fish that eat the fruits of many plants. Most commonly in scientific studies and commercial operations, sulphuric acid is the acid of choice, either in a concentrated form or at 10% dilution. Depending on the strength of the seed coat, the seeds then remain in the acid for anything from 30 minutes to 3 days.

A number of the chemicals above are either known plant hormones or have structural similarity to plant hormones. Gibberellins are the natural plant hormones thought to be responsible for triggering the internal biochemical pathways that lead to germination. As gibberellins are such potent stimulators of germination and work at very low concentrations they have been used commercially to promote germination in a range of plant species. Also listed above are karrikins, which although not plant hormones are classified as ‘plant growth regulators’. This is because karrikins (pictured below) are formed in burning plant material and in the 1990s it was discovered that it is these chemicals that are responsible for the mass triggering of germination observed in Mediterranean habitats after there is a bush fire. As a result of this discovery karrikins and smoke-laced filter papers are used to germinate a wide range of plant species with low germination rates, both for commercial propagation, and to help preserve the rare plants of Mediterranean regions. Nitrates have also been found to stimulate germination in a range of plant species. It is likely that plants have evolved to use the presence of nitrates as a signal that the seeds are in a soil with ample nutrition and thus a good site to germinate. Other nitrogen-containing compounds on the list could also be acting by stimulating the nitrate signalling pathway directly or by being oxidised to nitrates whilst present in the seed’s growing medium, and then stimulating germination. Unfortunately, it is not just crop plants that respond to nitrates, with the germination of weed seeds also strongly promoted by nitrates.

Many other chemicals applied to seeds will actively inhibit seed germination. Some of these are directly toxic to plants, such as commercial herbicides. Others have an inhibitory hormonal action, such as abscisic acid, which is the key hormone controlling the natural dormancy process found in many seeds of perennial plants. Auxin, the plant hormone found in rooting powders is also inhibitory to germination as are chemical inhibitors of gibberellins, such as paclobutrazol, which is logical given the key role gibberellins play in initiating germination. Finally, some chemicals that inhibit germination act by exerting an osmotic effect and thereby preventing water from entering the seed. Salt is thus a potent inhibitor of germination, but so too are most soluble fertilizers in high concentrations. Without water entering the seed, germination can never take place.

If you would like to know more on this topic or have any issues regarding germination please get in touch.