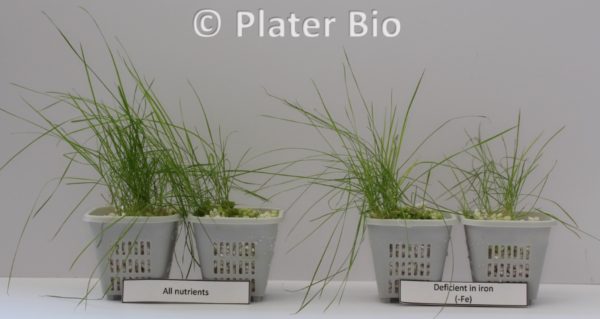 As with all growers, greenkeepers and groundsmen use a variety of tools to ensure that their plants have adequate nutrition. This includes regularly sending off both soil and tissue samples to accredited labs for analysis to indicate the nutrient concentrations, or in the case of soil samples their availability. They will also make use of historic knowledge of the pitches/courses growing conditions and a knowledge of when specific nutrients need to be added through the year. Together these tools are used to draw up a fertilizer program. However, turf professionals currently lack one key tool that is available to most growers/farmers of other ‘crops’; that is a good visual guide to the symptoms of nutrient deficiency.

There are some images taken from a seminal study on turf grasses by James Love at the University in Wisconsin available online. However, as these images date from the early 1960s, they are grainy and it is very difficult to differentiate between the symptoms. As a result, the only real option so far for turf growers has been to cross-relate knowledge from related plant species grown as crops; chiefly cereal crops. As such images such as the one below for corn/maize are commonly cited by turf professionals. Unfortunately, maize is an especially poor choice to compare to turf grass as maize belongs to a completely different subfamily to the grass species used in turf, and has markedly different metabolism and cellular structure. Maize possesses a C4 carbon fixation system and is in the Panicoideae sub-family, while all turf grass species possess a C3 carbon fixation system and are all in the Pooideae sub-family. As such the chances of maize and turf grasses having similar needs and symptoms of deficiency is doubtful.

But do we know for certain that the symptoms of nutrient deficiency are not the same across all grass species? No, so we need to experiment. Consequently, Plater Bio is aiming to create a visual resource where turf professionals can access images of every nutrient deficiency in each of the economically important grass species used in sport and amenity turf and grasslands.

So how do you go about creating such a resource? Well there are three potential options. The first and easiest way is to wait until you come across some sick looking grass and then analyse the soil/tissue to see what is lacking. However, it cannot be said for certain that one specific nutrient is responsible for the symptoms even if one seems to be clearly lacking. It might be that nutrient causing the symptom, but equally it may also be an environmental stress, disease or toxicity causing the sick appearance.

Another option is to apply a single nutrient fertilizer (e.g. ammonium nitrate) and then compare pictures of the plants before and after. However, if growing in soils with already adequate levels of nutrient, there may not be any noticeable difference. This will be especially true for micronutrients.

The best way to know for sure what symptom corresponds to which nutrient deficiency is to grow plants in very controlled conditions out of the soil and then specifically exclude one nutrient completely from the growing media. The plants are then provided with all other essential nutrients and other requirements (light, warmth etc). Then over time the symptoms of deficiency will appear and the result can be recorded. This is exactly what we are doing at Plater Bio in our glasshouses (pictured below). A similar experimental method was employed in the seminal study by James Love, which we will build on by employing high resolution digital photography as well as taking advantage of the advancements that have been made in hydroponic and turf grass cultivation over the past 55 years.

So why hasn’t this experiment been repeated since the 1960s? Simply it is extremely technically difficult and complicated as you need a unique hydroponic fertilizer formulation with over 20 different chemicals for each different treatment. You also need to monitor the pH, electrical conductivity and growth almost daily. In fact, it is so difficult that even for major crops like tomatoes and peppers growers also still rely on images that are decades old (and thus low resolution). However, at Plater Bio we have already developed a very fast bioassay system that can cope with this demand and our technical department have the formulation knowledge to create all the fertilizers involved. Plus, we understand how useful such information will be to end-users, so soon we aim to bring you the results for three of the most commonly grown turf grasses; rye (Lolium), fescue (Festuca) and bent (Agrostis). Once the symptoms have exhibited themselves we will be taking high resolution macro and micro images and preserve the samples for further analysis.

For the micronutrients sodium and chlorine, deficiencies will not appear in our system because of contamination from the fertilizing materials and tap water being used. Clearly you could purify the water and use purer grades of chemicals to ensure that these deficiencies do appear, but in the real world you will never experience a deficiency of sodium or chlorine in turf grass and as a result neither need to be purposely added to turf fertilizers.

In other incidences, no deficiency symptoms may develop but the plant will still be deficient and growth will slow. This is termed hidden hunger and it is equally important to know which nutrients it is associated with in turf.

It is also important to bear in mind that comparing a sick looking grass to pictures of deficiency symptoms is only one tool that can be used to diagnose the problem and cannot be used in isolation. The obvious analogy being that you wouldn’t rely on the presence of a red rash on your skin to confirm a specific disease and begin treatment with a drug, you would want to back this up with blood tests to confirm what is wrong with you!

Plater Bio’s long-term plan is to expand these experiments to include symptoms of nutrient excess/toxicity, poisons, the effect of biostimulants, and the effect of applying nutrients in different molecular forms. We can then use the data obtained to further advance the next generation fertilizers we are manufacturing at Plater Bio. So please get in touch if you are interested in the project or have any questions or issues relating to fertilizers.